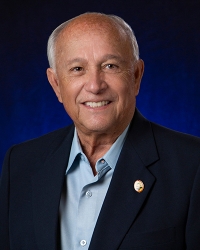 Chief Advisor to the
Governor of Guam -
Economic Development,
National and
International Affairs

Carl T.C. Gutierrez is a former two-term governor of Guam (1995-2003), lifelong public servant, and businessman who leverages native intuition and team building to dream big, calculate risk, and plunge ahead to solve critical problems and achieve monumental goals in a hurry. Driven by an insatiable desire to deliver a better quality of life for the people of Guam, Gutierrez’s approach begins by focusing talents and energies on the single most pivotal aspect of any given situation. He builds momentum by announcing his aims, gathering multiple commitments, and igniting a sense of mutual expectation and excitement. This drives action and results with a sense of speed and urgency. It also leads to celebration and a reenergized readiness to tackle the next challenge.

Gutierrez’s lifelong commitment to unconventional problem solving began with an adventurous childhood in Guam and high school in California and manifested itself through a career that began in the U.S. Air Force as a computer specialist. Exiting the military, Gutierrez became a homebuilder and general contractor who employed over a hundred Overseas Filipino Workers and made their families a part of his own. Activity in politics led to a 25-year stretch in the island legislature marked by continuous coalition-building and coveted leadership positions including Chairman of Ways and Means and Speaker of the Senate.

2 term Governor of Guam. Upon assuming office on January 2, 1995, Governor Carl T.C. Gutierrez focused his work in the areas of infrastructure so that all the marginalized people will be brought into the 20th century before it went out and also pushing for economic development by aggressively completing 85% of his Vision 2001 plan by the end of 1999. Despite a super majority Republican Legislature, the Gutierrez-Bordallo administration was successful in guiding the island through the rough waters of economic downturns throughout the region.

The tourism economy was also severely affected by the crash of Korean Airlines Flight 801 on August 6, 1997. During the rescue efforts, Gutierrez was one of the first responders and the first to reach the burning plane along with Dep. Fire Chief Chuck Sanchez and his security police officer Cecil Sulla. Gutierrez was credited with saving several lives, including 11 year- old Rika Matsuda and Barry Small, an injured helicopter mechanic from New Zealand, who called Governor Gutierrez a "Hero." Gutierrez received the Eagle Award, the highest award given to a civilian by the U.S. National Guard Bureau. He was recognized by the governments of Japan and the Republic of Korea.

9 term Senator and Speaker of the 17th and 18th Guam Legislatures -Governor Carl T.C. Gutierrez was selected by his colleagues to serve as Chairman of the Committee on Housing and Urban Development in the first of his nine terms as senator. During his first term, Carl Gutierrez authored the GHURA 500 Low and Moderate Income Housing Law, which used five parcels of government land in Dededo and Yigo to build 500 homes, and established the Guam Youth Congress. His long history of public service also includes election as President of Guam's first federally recognized Constitutional Convention and as the architect and father of computerization of the Government of Guam. In 1977, by authorization of Federal Law and Local Law, Gutierrez was elected to the First Constitutional Convention and was elected by his colleagues to preside as president. A constitution was drafted and approved by US President Jimmy Carter and the U.S. Congress but was later not ratified by Guam in a 1979 special election. Gutierrez served as advisor to Palau's Constitutional Convention in 1979 and was later made an honorary citizen of Palau by legislation. He co-sponsored legislation creating the APIL, association of Pacific Island legislatures. He was elected to three terms as their president.

Of his nine total terms, he served three as Chairman of the powerful Committee on Ways and Means, and was twice elected by his colleagues to be Speaker of the Legislature. 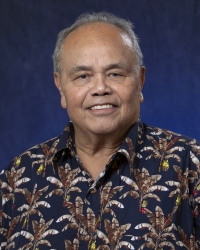 Delegate, White House Business Conference in 1982; and author of more than 30 technical publications and other papers related to biological sciences, economic development, cultural issues and tourism.